The Assam Government Public Library was established in Shillong in the year 1903. It was started in two rooms in the first floor of the building in front of State Transport Office located at Police Bazar, Jail Road Shilong. The same building also housed the Chapala Book Stall and one Bank in the ground floor. It was the main base from where the Assam Library Movement was germinated. Only a few retired and renowned personnel enjoyed the facilities of the Library Services but gradually started becoming popular among the common masses. At that juncture Sri Ram Goswami joined the Public Library as Assistant Librarian and had given the much needed thrust and direction to the library movement through his devotion to the cause to generate reading habits among the masses as it was one of the main media to widen ones horizon by reading books.

In the year 1956 the State Central Library was established in Shillong and the Public Library was merged with the State Central Library. Due to separation of Meghalaya from Assam and subsequently shifting of the state capital from Shillong to Guwahati as per resolution in the undivided state assembly in the year 1971 it was decided to shift all the office of the Assam Government to Guwahati in the year 1972. An agreement was signe4d by the Assam Government and the Meghalaya Government to share the books and other accessories of the State Central Library. As per the agreement the extremely beautiful Children section and the Reading Room and half of the books stored in the library was given to Maghalaya Government. In that crucial period on behalf of the Assam Government Sri Abhay Charan Borkotoky, then Sr. Deputy Librarian with the help of his subordinate employee Sri M. C. Goswami managed to shift the rare and invaluable books to Guwahati under his safe custody overcoming lot of obstacles and kept in the Reference Section of the then State Central Library, Assam, Guwahati.

Available in the library are given below :

From 1972 to 2011 more than six times these rare and invaluable books available in the Library were exhibited in different Book Fare and Book Exhibitions. These books are available in the Reference Library under the Directorate of Library Services, Assam, Guwahati.

In the year 2009 the Research & Reference Section was renamed as Dr. Hiranya Chandra Bhuyan Memorial Library.

Total No. of books on Research and Reference Section-40886 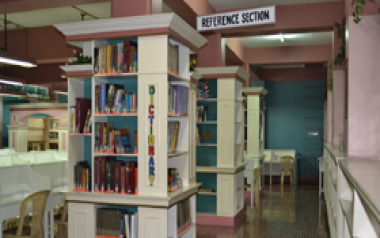